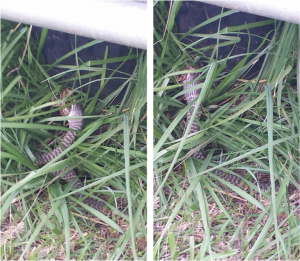 We had some great photos sent in the other day from Michelle here in Brisbane to help identify a snake in her yard. After speaking with her I was fairly sure it was a Keelback or Freshwater snake (Tropidonophis mairii). But the real proof came when she told me it had eaten a toad in her backyard, all caught on camera. As you may know, Australia has no native toads, just one introduced species, Rhinella marina, the cane toad, a species which produces Bufotoxins in its parotid glands and skin.

Historically, Australian fauna has had no interaction with poisonous toads and as such many species are highly susceptible to its poison. The reason is twofold. First is the aforementioned lack of co-evolutionary history, so predators’ immune systems haven’t adapted to deal with this kind of poison. Secondly, with no poisonous toads around, amphibians are on the menu of practically every predator there is. In fact in some areas certain species will feed almost exclusively on frogs, such as green tree snakes in south east Queensland, meaning poisonings occur frequently and many species suffer. The Keelback, however, arrived here much more recently and with a south east Asian origin it is very likely to have come across bufotoxins in its evolutionary history. Thus it has a suite of genes ready to deal with the cane toad’s poison, but it’s not all that simple.

Unfortunately the immune response of Keelbacks can’t deal with Bufotoxins as easily as we’d hope, with larger toads requiring a long recovery period, and generally leads to less healthy snakes than those feeding on poison-free frogs. Still it’s good to know that there’s a vertebrate out there targeting the cane toad, particularly as tadpoles and small toads, which it can easily manage. As this species is non-venomous and a great toad manager, Michelle was happy enough to leave him be and go about his snakey business, hopefully to bump off a few more toads!