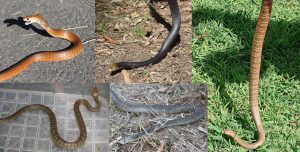 In response to a question we received about brownsnakes and colour in reptiles, we posted a long #SnakeRant yesterday. Here it is again with a couple of photo collages to demonstrate the variety and beauty of these awesome creatures. Enjoy!

Colouration control in animals, reptiles included, is a fascinating field of study. While there are always exceptions to these concepts, colour in reptiles is generally the product of pigments created in colour cells called chromatophores, found in the dermal skin layers. Melanophore cells create black and brown colour by producing melanin pigments, Erythrophores produce red pteridine pigments, Xanthophores produce yellow from carotenoids, and the funky Iridiophores contain crystalline purine-molecule reflecting platelets that alter spectral reflectance and interact with other pigments to create blues, greens, whites, and more, even rainbow 🌈 reflectance!

These cells are all under genetic control, as are the biochemical processes that regulate production of pigments molecules like melanin. This is well demonstrated by conditions such as Albinism. Inside Melanophores, melanin is typically produced by a chemical process called melanosynthesis, whereby the enzyme ‘tyrosinase’ converts the amino acid tyrosine into dihydoxyphenylalanine, which is oxidised into melanin and expressed in the cells. However, mutations to the gene for tyrosinase, TYR, can occur in multiple ways, from sequence copy error to UV rays hitting sperm DNA etc., causing tyrosinase to either not function correctly, or not be produced at all. Thus no black pigment is created, no dark colour is produced, and we get an albino baby snake! Incidentally, albino reptiles may still have perfectly functional Xanthophores, Erythrophores, & Iridiophores, and are often very pretty in captivity.

Aside from the TYR gene, there are many other genetic components that control or regulate some facet of colouration, such as M1CR, CYP2J19, and many more. In the wild, natural selection will likely weed out most albinos and other colour aberrations quickly, as predators including goannas and eagles easily spot an uncamouflaged animal. Genes for colouration are therefore often under strong selective forces, but they are also numerous. Further, colouration overall is likely to be both pleiotropic (one gene affects multiple traits eg colour and height) and polygenic (the product of multiple genes), so the interaction is very complex (geneticists are hard at work studying this!), and can produce variation in various degrees and in various dimensions of colouration, from light to dark, patterned to plain, and more. 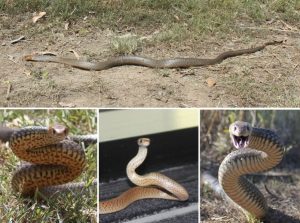 What, then, is a good colour for a brownsnake? I suppose the name is some indicator, and Eastern Brownsnakes (Pseudonaja textilis) are widely distributed from coastal areas to grasslands, heaths, woodlands, and more, where they can mimic any variety of fallen branches, dry grasses, sandy or brown-earth substrates, and so on. I can only assume that varying the darkness, redness, patterning etc. via the enduring process of mutation, evolutionary-developmental processes, and natural selection, has allowed numerous colour gene variants to accumulate and spread successfully throughout much of the Eastern Brownsnake population, much like gingers, tall lanky folks, the rainbow of beautiful skin tones, or the green-eyed amongst our own, invariably colourful, and wonderful extended human family across the globe.

Endless forms most beautiful or whatever, to misquote the man himself, ol’ Charles Darwin. #RantOver

For a longer discussion on the topic of reptile colour, visit our blog below 🙂

Essay 14. Snake Skin, Scales, And The Rainbow of Reptile Colouration